I was remembering the other day what happened when I first encountered Buddhism. A new friend at college happened to mention that there was a talk on that evening by a Tibetan Lama in York – he was not Geshe Kelsang, who became my teacher, but a visitor who was being hosted by the Buddhist Centre. I took another nice, new friend, M., along with me, not having a clue what to expect (this was 1981 in the North of England when meditation was an alien concept to most people.)

To be honest, I hardly understood a word this Geshe said. But during the course of the evening, I couldn’t help thinking: “Whatever it is you have, I want it.”

He said a couple of things I sort of got, the words at least. The first was a comment about how we have radiators in the West, followed by his falling about laughing – something he seemed to be doing most of the evening. I suppose for someone who grew up in Tibet, radiators and other Western technology must have seemed quite amusing. (This was in the days before SmartPhones, which he would doubtless have found hysterical.) M. told me later that I was laughing uproariously and a little crazily at everything, which seems strange given that I didn’t know what this happy Tibetan was saying; but clearly this stuff was infectious.

The other comment I remember from that evening was:

“We are all on the airplane to enlightenment!”

(Followed by even more laughter.)

We’re what??! I thought. What is he talking about?! I knew I still liked it, I probably laughed along, but I wasn’t sure what it was I liked. And, when I stopped to think about it, enlightenment or Buddhahood sounded rather pie in the sky. As far as I was concerned, I’d be lucky to just get through the day without getting annoyed with someone. If Buddhist meditation could do that for me, I’d give it a shot.

And so M. and I did, the following week at the regular introductory meditation class at our nearest Buddhist centre. That was almost 32 years ago. The rest is history.

Although I well remember how pie in the sky enlightenment felt back then, since then I’ve decided that it really is not that much of a culturally alien concept, let alone an impossibly idealistic goal. Indeed, it is within the reach of every one of us; we just have to get going, starting with wanting it.

The other day I asked some friends if they wanted to improve. They said yes. Then I asked them what would happen if they did improve a bit and became a bit kinder and wiser, for example – would that be enough, or would they still want to improve? They said they would.

Interesting, I said. No wonder Buddha says we all have Buddha nature or Buddha seed, which is our natural potential for improvement; we clearly feel it on some level. We have this potential because our mind is not inherently existent, or fixed, which means it can change. If you really want to improve, then your Buddha seed has already sprouted into the beginning of a Bodhisattva’s mentality because a Bodhisattva is someone who has taken that wish to its logical conclusion and wants to keep improving until there is no further room for improvement.

And there you have it, I said. You’re already just like a baby Bodhisattva, who has taken this wish to its logical conclusion and wishes to help all living beings without leaving anyone out. That wish is part of our compassion, also our Buddha nature. We are naturally kind because when our delusions are not functioning we default to being peaceful and free from self-centeredness, connected to others. 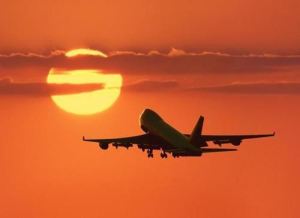 A Bodhisattva is someone who wishes to help all living beings without exception by attaining enlightenment aka becoming a Buddha. A Buddha is someone, anyone, who has perfected all their good qualities and got rid of all their faults, viz, improved until there is no further room for improvement.

What is so pie in the sky about that? We just have to train in our natural wishes and let our mind expand. We are all on the airplane to enlightenment; we just have to get it off the ground.

21 thoughts on “Is enlightenment pie in the sky?”