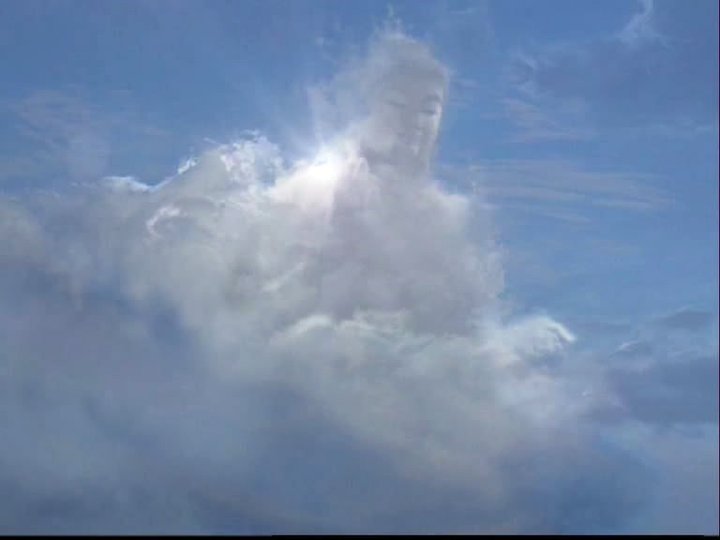 A bit more on the subject of delusions and how to get rid of them.

Nothing is as it seems

If it is true that

“The things we normally perceive do not exist”

it means that nothing is really out there, and everything is free of being real and fixed. This means we can change everything by changing our mind. As Nagarjuna says:

If we fall into the trap of thinking that the causes of our problems are out there — independent of our perceiving consciousness, existing from their own side — it’ll make us focus all our time and energy into solving them out there; when all this time it has been the delusions inside our own mind that are actually wrecking our happiness.

Meditation is designed to tackle these enemies within, having understood that we’re not doomed to suffer from their attacks forever, unless of course we do nothing about them. They’ll never go quietly away forever on their own – but if we learn what they are, how they function, and how they arise, we can identify and get rid of every last one of them.

Delusions are just thoughts; we don’t have to let them rule us forever. They are not an intrinsic part of our mind — they are like clouds in the vastness of our sky-like mind, which will not manifest without the appropriate atmospheric conditions. So, devastating as they can be when they do arise, they’re not here to stay, any more than Superstorm Sandy stuck around. If they were a permanent and intrinsic part of our mind, we might as well just curl up in a ball and give up. But we know that even without doing anything about them our delusions come and go. This explains why right now you probably don’t feel like yelling at anyone, but the conditions could come together and then you might, only to get over that and regret it later. Or why you are lovesick today but will probably feel pretty cheerful again later.

This is why we can say “Time heals”. Of course, if we do do something about our delusions, time heals a darned lot faster. 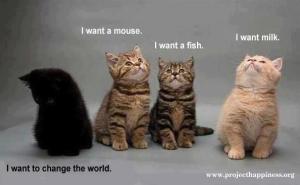 Say for example you want to decrease your dislike, irritation, intolerance, etc — the whole cluster of delusions associated with the inner enemy of hatred. Well, first of all you could identify the mind of hatred, see what’s wrong with it, see how it’s causing you and people around you to act and suffer, and in this way develop the determination and will power to get rid of it. You can then meditate on its opponent, which is love — finding others likeable, holding them dear, wishing them to be happy.

As human beings, we are uniquely able to do this. Rousseau, the Russian Blue, has of late been coexisting peaceably with Monkey, the Bengal Tiger, much to we humans’ relief. These cats are both adolescent alpha males who were at each other’s throats so regularly that Monkey’s parents and I had to come up with a schedule of when they could each go out. (For those of you who say they should stay inside, you may be right, and I tried it, but it was like living with a caged panther, actually in the cage…) Anyway, of late our schedule was set aside as the two cats have been seen lying near each other on the same sidewalk, even looking at each other without growling, an uneasy but welcome truce settling on the neighborhood.

Yet two days ago I was once again forced out of my house with my water gun (range 25 feet!) when I heard the awful noise of two cats fighting. The water gun was not even sufficient this time – I had to wade in there and pull them apart. Monkey had narrowly missed scratching Rousseau’s eyes out, those same eyes that I find so beautiful and want to preserve, because he hated Rousseau at that moment due to the cloud-like delusion obscuring his mind. Who knows what exactly provoked them on this occasion, but I’d be prepared to bet that their reaction was over the top with inappropriate attention, not worth losing one’s eyes over, let alone one’s life. Later that evening I read about the latest fighting in some part of the world – one day young men neighbors on the sidewalk, the next day tearing at each others’ throats, the next day (or year) regretting it.

If, unlike Rousseau and Monkey, we generate the mind of tolerance and love through contemplating and meditating on instructions we have heard, and then hold that love at our heart and familiarize ourselves with it, it’s like turning up a dimmer switch in our mind. As we increase the light of our love, automatically the darkness of our hatred diminishes because they are polar opposites – they cannot both arise in the mind at the same time.

So creating the atmosphere of love inside the mind means that hatred cannot get a foothold. That bad habit starts to get weaker and weaker through lack of use, and that good habit of love becomes stronger and stronger through the power of our mindfulness and our concentration. As we gain familiarity with it, it becomes more natural and more powerful, and sticks with us for longer and longer periods of time. We find that in situations that would have aggravated us before, instead of an automatic, uncontrolled response of dislike, we respond with liking, and then love. This really does happen.

10 thoughts on “How meditation overcomes negative thoughts and emotions”