Scientists say they have evidence to show that Buddhists really are happier and calmer than other people.  ~ Reuters

For more than twenty years now, in the press — in the cracks between all the disasters erupting all over the world — there has been increasing talk about the scientific findings which indicate that meditation and mindfulness within or from the Buddhist tradition leads to genuine lasting happiness and mental freedom.

Over these years, I have seen articles with titles like “Buddhists Really are Happier”, “Buddhists Transcend Mental Reservations”, “Meditation Shown to Light Up Brains of Buddhists”, and “Buddhists Hold Key to Happiness”.

The quantum folks are famous for their research into the role of the observer in creating reality — but it is not just in quantum physics that people are getting to the bottom of why the benefits of meditation might be so mind- and life-changing. Other studies — including within the scientific disciplines of epigenetics, neuroscience, electromagnetism, psychoneuroimmunology, psychology, and even public health — are now coming into synchronicity with the ancient Eastern understanding about the unbreakable connection between mind and matter.

Numerous experiments are showing how our thoughts and intentions can literally rewire our brains in all the right places, change our brainwaves for 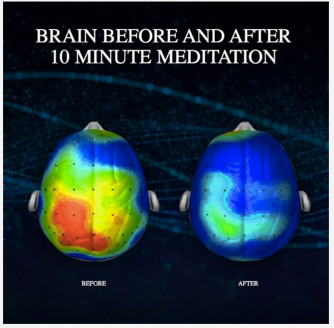 the better, fill our brains with those feel-good hormones, heal our bodies, and delay ageing cells.

In other words, consciousness changes matter. Ideas become things. Everything starts in the imagination. With our thoughts we create our world.

Buddhists have been saying this kind of thing for at least 2500 years, but it was not so long ago in the West that pretty much all conventional wisdom held it to be entirely the other way around.

With a dualistic view of mind and matter, reductionists for example were unable to come up with a bridging mechanism between two — as they saw it — ontologically diverse realms of mind and matter. One of these realms had to go, so they did away with the “ghost in the  machine”. The only primary reality was seen to be physical, so everything was “reduced” to the material. Thus, consciousness was regarded as some kind of by-product of matter, secreted by the brain like the liver secretes enzymes for example — although that has always been hard to prove, let alone to reconcile with people’s own firsthand experience of thinking. People’s subjective awareness is not experienced as physical or material — hence 20th century Western philosophy’s ongoing perplexing “question of consciousness”, a question that cannot be answered within the paradigm of mind-matter duality.

The pervasive materialistic world view, seemingly unquestioned for decades, has led to a great number of problems, such as a preoccupation with material development at the expense of moral, mental, or spiritual development. The winner is the one who dies with the most toys. As it says in the Big Short:

It ain’t what you don’t know that gets you into trouble. It’s what you know for sure that just ain’t so.

There has never needed to be any problem with asserting two primary realities, as I mention in this article – for they are not dualistic, competing, ontologically oppositional realms, but arise in synchronicity, as the same nature.

Anyway, all that philosophy and fancy adjectives aside, studies of meditators’ brains are showing conclusively that we are not, as once believed, hard-wired, but that our thoughts change our brain throughout our whole life.

This change can happen even really quite quickly, such as in the example of Dr. Graham Phillips whom I read about in this pretty fascinating book: Mind to Matter (being read as we speak downstairs by my dad).  This skeptical Australian astrophysicist underwent a battery of tests, including MRIs, both before and after starting an 8-week course of meditation, to find hard evidence of whether this “feel-good technique” actually could do anything for him. After just two weeks he reported that he “notices stress but doesn’t get sucked into it.” After 8 weeks, the key discoveries were:

Here are some other quotes, and a Google search will surely deliver loads more…

Scientists at the University of Wisconsin at Madison used new scanning techniques to examine brain activity in a group of Buddhists. They have discovered that certain areas of the brain light up constantly in Buddhists, which indicates positive emotions and good mood. This happens at times even when they are not meditating.

Researchers at University of California San Francisco Medical Center have found the practice can tame the amygdala, an area of the brain which is the hub of fear memory. They found that experienced Buddhists, who meditate regularly, were less likely to be shocked, flustered, surprised or as angry compared to other people.

(From The UK Independent:)

“Buddhists who meditate may be able to train their brains to feel genuine happiness and control aggressive instincts”, research has shown. According to Owen Flanagan, professor of philosophy at Duke University in North Carolina, Buddhists appear to be able to stimulate the left prefrontal lobe — an area just behind the forehead — which may be why they can generate positive emotions and a feeling of well being.

Writing in today’s New Scientist, Professor Flanagan cites early findings of a study by Richard Davidson, of the University of Wisconsin, who used scanners to analyse the active regions of a Buddhist’s brain. Professor Flanagan said the findings are “tantalising” because the left prefrontal lobes of Buddhist practitioners appear to “light up” consistently, rather than just during acts of meditation. “This is significant, because persistent activity in the left prefrontal lobes indicates positive emotions and good mood,” he writes. “The first Buddhist practitioner studied by Davidson showed more left prefrontal lobe activity than anyone he had ever studied before.”

There was a time in the Western world when meditation in general and certainly Buddhist meditation was considered somewhat weird, probably escapist, impractical, and most certainly “alternative”. When I got interested in Buddhist meditation over 37 years ago in the north of England, most people had barely heard of Buddhism or even meditation. Back then, unless asked directly, I rarely mentioned that I meditated, let alone that I was a Buddhist, because it would generally lead to blank stares and a quick change of subject. That still happens sometimes today, of course, but nothing compared to then.

Those days are going. With the explosion of interest in Buddhism and mindfulness (derived from Buddhism) throughout the Western world, taught even in schools, both meditation and Buddhism have now become mainstream words and concepts.

For me, it is not that these articles have told me anything I don’t already know about how great meditation makes me feel, or how it keeps on changing my life for the better in pretty much every single area I can think of. Also, although curious, I’m not really bothered that my squidgy brain as a long-term meditator may look relatively impressive today compared with how it looked 37 years ago. 😁

However, what I do really like is that modern science is catching up to and even recording some of the very tangible benefits of meditation, benefits that anyone can gain if they just do it. I think it means that more people will gain the confidence to try it out and stick at it, and then they’ll get these great results.

One last quote from the New Scientist:

Buddhists are not born happy. It is not reasonable to suppose that Buddhists are born with a ‘happiness gene’. The most reasonable hypothesis is there is something about conscientious Buddhist practice that results in the kind of happiness we all seek. Antidepressants are currently the favored method for alleviating negative emotions, but no antidepressant makes a person happy. On the other hand, Buddhist meditation and mindfulness, which were developed 2,500 years before Prozac, can lead to profound happiness.

Meditation may not be a best-kept secret for much longer.

Over to you. Comments very welcome!

7 thoughts on “Buddhist meditation: one of the world’s best-kept secrets?!”