We stumbled into a metamorphosized New York on Halloween, a veritable charnel ground, when we decided to watch the parade down in the Village. The altered reality started for me on the subway, people dressed in outlandish costumes and behaving larger than life, but I was not expecting the sheer torrent of ghouls, torture victims, skeletons, Playboy bunnies, Spidermen, Spiderwomen, Clark Kents, bananas, skyscrapers, and slices of pizza with eyes we encountered from the moment we exited a 6th Avenue subway and were herded in some strange dream down the sidewalk by a (genuine) New York cop. I saw another cop standing commandingly on a bench, and flinched as he turned to point his gun at me – turned out to be plastic, of course. (Thought you weren’t allowed to impersonate police officers?!) I saw a homeless person in a doorway – only he turned out to be “real”. I saw someone with folds of flesh hanging from his face – he sadly turned out to be “real” too. So did a couple of dogs, visitors from the animal realm, who were looking around in absolute bewilderment.

But although all appearances are deceptive all the time, sometimes it is even harder than usual to tell what is “real” and what is “pretend”. Wave after wave of vampires, bubbles, jellyfish, cuddly tigers, drag queens, schoolchildren, footballers, skeletons  – the sidewalk every bit as outlandish as the parade. We walked for miles with no let up, Gotham simply teeming with strange creatures, like some kind of Star Trek convention, only weirder. Me and my companion were wearing jeans, woolly hats, thick jerseys, and Patagonia overcoats (it was freezing, though try telling that to the Playboy bunnies and gay prostitutes) – the party-goers were probably guessing we were dressed up (maybe a bit too) convincingly as boring, straight, middle-aged friends from somewhere (anywhere) other than the coolest city on the planet, if they noticed us at all.

There is nothing fixed about us at any time. We tell stories about ourselves to ourselves and then believe them as the gospel truth, even though our sense of self changes from day to day, from hour to hour, and perhaps especially on Halloween, America’s favorite holiday.  So who were these New Yorkers? Who did they think they were for that one night only?! And could you really say that they were the “same” people we saw in their macs and umbrellas the following grey morning? Did they believe their own new identity, or after a few minutes were they having “normal” conversations based on their normal personas, forgetting they were

supposed to be the Stay Puff Marshmallow Man? We did witness quite a few arguments, one ballerina screaming, “We were trying to have a good time, and you RUINED it! You ignored me! You are totally different with your friends!” (I wonder whether his friends are also Yetis.) Is she always high-strung, or was she relating to herself as a beautiful but half-starved neurotic dancer?! Is it easier or harder to have a good time in samsara when you are masquerading as some other samsaric being? Or are all worldly appearances deceptive and, sooner or later, painful? Is there happiness to be found as any being in any realm in samsara, from the scary denizens of the hells, to the spirits and ghouls, to the leopards, to the Hollywood royalty? I didn’t see anyone dressed up as a Buddha or a Bodhisattva. Now, that might have worked. But I have to say that me and my friend were not finding it too hard in this surreal scene to self-generate as undercover Heruka and Vajrayogini in the charnel grounds of the Tantric mandala, and as a result had a pretty blissful, meaningful evening.

Appearance vs reality, I was thinking (amongst other things). Where were we?! Where are we?! What is really going on? Where is New York? Totally unfindable! The New York of Friday 31st bore no resemblance to the New York of the following morning, but what actually changed? Like a dream, Halloween minds ceased and their appearances simply disappeared, coming from nowhere, going nowhere. Where are you right now? Who are you? There is nothing actually there, which means we can be anyone and we can be anywhere, as long as we don’t grasp at any of it.  When we understand how all conventional truths are created by the mind of self-grasping, as Geshe-la explains in The New Heart of Wisdom, we know not to fully trust our senses or even what our gross conceptual thoughts are telling us. Appearances are deceptive … unless they are appearing as not other than emptiness. We are constantly hallucinating to a greater or lesser degree. We have gross or subtle inappropriate attention going on pretty much 24/7. 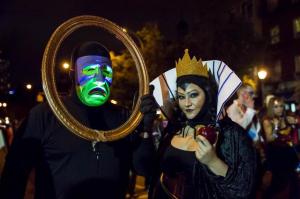 For ordinary beings, our minds and their objects deceive us, are more trick than treat. In which case, what can we trust? I think we can trust: faith in the possibility of transcendent, pure worlds, beings, and minds; renunciation for the samsara created by the hallucinatory minds of self-grasping and self-cherishing; compassion for dream-like suffering; love; bodhichitta; the first 5 perfections — any of the so-called “method” practices. We can rely on these states of mind, even more so if we are gradually imbuing them with the wisdom understanding that nothing is really there, meaning that trying to fix things just “out there” is like trying to move objects around in a dream or on a movie screen.

One day our direct realization of appearance and reality as being one truth will mean we can stay single-pointedly absorbed in the ultimate nature of reality while simultaneously emanating countless appearances to help others, vis-a-vis we will have attained enlightenment. But for this to happen, I think now is a good time to understand that the only object 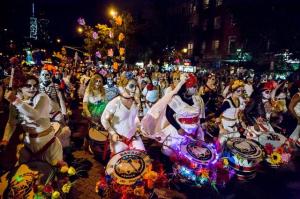 which exists exactly as it appears, or in other words is 100%  trustworthy, is the emptiness of inherent existence. (This is the absence of things existing from their own side, as anything more real than dream-like mere appearance.) Moreover, although love is essential, compassion is indispensable, and so on, the only mind we can trust completely is the very subtle mind of clear light, in which all the things we normally see have disappeared and to which emptiness/reality is always appearing.

Halloween in New York reminded me of all this, and how important it is to train and purify my mind, to break through all the phantasms and disguises, until I see the truth directly.