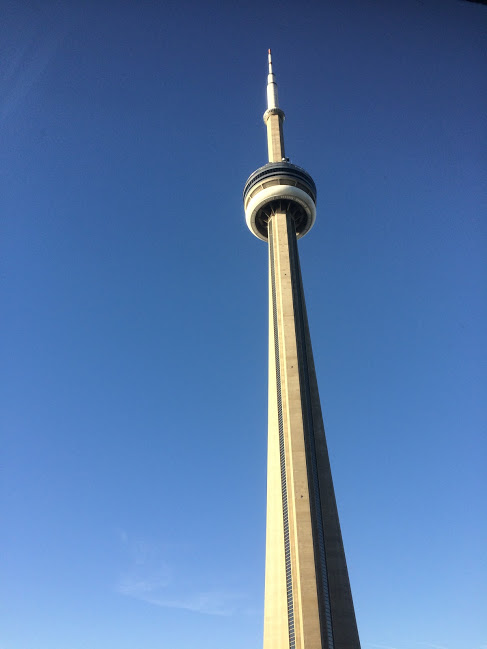 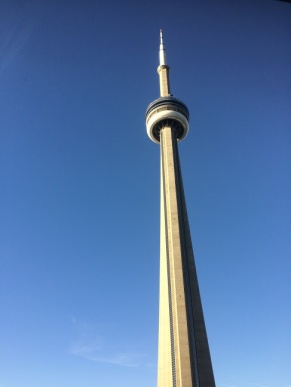 I have been at the Fall Festival in Toronto this week, which has been an incredible pleasure, one that could only have been improved upon if you had all been here as well. During one lunch with my old friend G from Florida and his charming new wife S, who is relatively new to Buddhism, she asked me how it is that living beings are experiencing suffering if that suffering is not “real”, or inherently existent – that is, if the suffering we normally see does not exist?

A similar question came up during the Tantric Q & A, to which Gen-la Jampa gave a beautiful reply. Only I didn’t take notes so you’ll have to wait for that. Unless someone feels like typing up their notes on that for us all in the comments section … ah, done, thank you, see below.

But I know that S has 3 crazy little mini-schnauzers, and so what I said to her was this.

Imagine that Murphy is sleeping on that huge big bed with you and G, and he is fine, all safe and cozy. But you see that he is whimpering and twitching, and you know he is having a nightmare. You know that he is not “really” 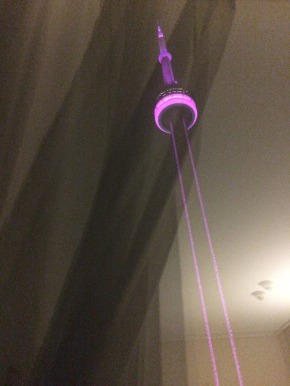 suffering, but that is not how he is seeing it at the moment. He believes that the big dog is actually attacking him or the black squirrel has outwitted him yet again or that his family have really deserted him (etc, etc, whatever). But you know that all this is mere appearance to his dreaming mind, and so all you want to do is wake him up.

The Buddhas feel the same way about us. All the time.

It’s a fine mess we have gotten ourselves into …

In a surreal counterpoint to this sane, harmonious Pure Land of the Festival was the divisive second US presidential debate – Greek drama or tragedy, take your pick. Jaws worldwide were dropping. You couldn’t make this stuff up. Only we did, between us. Please by all means vote on November 8; I certainly am going to. However, I have also concluded that the only way to cure these weird appearances and resultant widespread discomfort and delusion is to focus on developing compassion for everyone concerned (including the Rocky Mountain Trump supporter sitting next to me on this flight, who is drinking lots of beer and trying to sleep the whole thing off). Not to take these politic 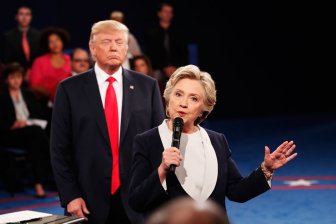 s too seriously, if I even could, but to remember to purify it nonetheless, remembering that it is all dream-like karmic appearance. (Perhaps it is even better that it is now “out” rather than “in”, providing it encourages us to do something about it.) For the alternative to purifying it is buying into it and experiencing an increasingly tangled mess.

I was moved by the last question of the debate, when an earnest undecided voter asked the candidates to please name one thing that they actually respected about each other — and they did both come up with something. The atmosphere in the town hall immediately softened. There was some opening. Everyone could breathe a little more freely. You saw the possibility of sanity and kindness being restored one day. All in the space of a few minutes. I know the clouds rolled back in again almost straightaway, but there was a glimpse for a moment there of sky-like Buddha nature.

Centered in the solution 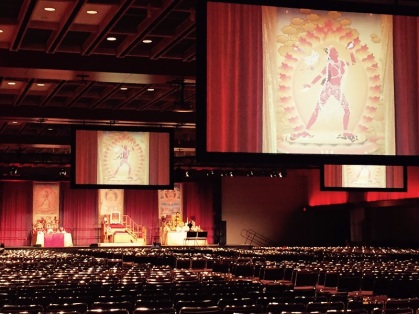 We think to cure suffering that we need to focus on the problem. But Buddhas never focus on the problem out of the context of being centered in the solution. How are we going to help others if we hold them to be inherently problematic? There is no space — there is no room to bring out their potential, their pure nature, their kindness or clarity or peace. All we can do is try and patch things up, shuffle things around, all the while in danger of being dragged further and further into the morass. There is no hope in a world of inherent existence. Borrowing the newly-minted Nobel Laureate to make this point:

Luckily the world is empty of inherent existence. As Gen-la Khyenrab explained in the Festival, emptiness is the true nature of phenomena. Emptiness is not nothingness; it is the opposite of nothingness. It is because of emptiness that everything can exist.

So emptiness means that things can change completely and radically – that this otherwise intractably tangled mess of samsara can be unravelled by pulling on a single thread. 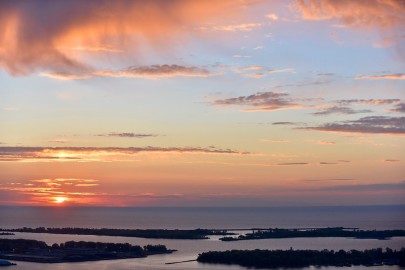 From enlightened beings’ point of view, we are already pure. Geshe Kelsang said in Portugal in 2009, for example, that he views us all as Heroines and Heroes, which is why he has so much respect for us. And this seems to be why he has never tired in liberating us, why he finds it effortless. Buddhas understand that we are not inherently pure, and that from our point of view we can feel far from pure. But that is just a point of view, and when we stop “awfulizing everything” with our inappropriate attention, as a friend put it the other day, and improve our imagination or imputation based on wisdom, we will see ourselves and others in a completely different way. No more “real” but infinitely more enjoyable.

Over to you, comments welcome.

How to be a hero

Tantra: Bringing the result into the path 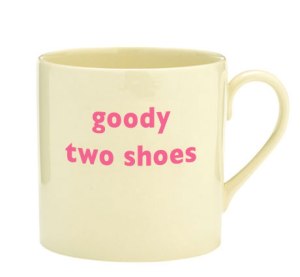 Sometimes I think we approach moral discipline the wrong way around, thinking of all the things we’d have to give up and deny ourselves if we really went for it, making our lives dull and hard work; and how we’ll be plagued with guilt the moment we put a step out of place. And perhaps we worry that meantime all our characterful, devil-may-care friends will find us really boooring…

But I think that moral discipline is really our way of not harming others and helping them instead. It makes us into a kind, reliable, happy, interested friend whom everyone wants to hang out with. Others can trust us, and are a great deal more likely to help us out when we need it.

“Anyone who deliberately harms others is no follower of mine.” 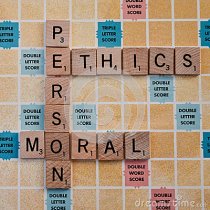 Within that, he advised us to avoid the so-called ten negative actions as our bottom-line moral discipline. We avoid killing and violence – and don’t you generally prefer to be around people like that? We avoid stealing, including stealing others’ partners – again, people appreciate us for that, and trust us. I know that I prefer to hang out with someone who will lift my spirits by not bitching on about others’ faults – sure, it can seem like a fun way to pass 15 minutes by the water cooler, but it always leaves a sour taste in the mind. We usually like people whom we know are not coveting our things or plotting to harm us or scorn us or slander us as soon as we hit any kind of road block. We enjoy the company of people who have open, curious minds, not closed minds through holding onto wrong views. We are more comfortable around someone who is not out of control through drinking and drugs (unless perhaps we are out of control ourselves). We like people with integrity.

It feels good to be around peaceful, relaxed people, and moral discipline leads to a more controlled and therefore peaceful mind. 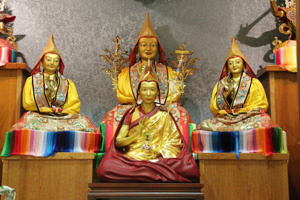 Like Je Tsongkhapa before him, Geshe Kelsang has said that he would like to create “pure societies” where people improve their cherishing of others and moral discipline together, encouraging each other. This does not refer to being an exclusionary, judgmental, “superior” goody two-shoes, much less losing our passion for life or our sense of humor. As mental freedom opens up in our mind through bringing our actions under control, we have a far lighter, happier, and more entertaining time, and this reflects in the people around us.

We have just had the International Kadampa Festival in Portugal, with inspiringly clear and do-able teachings from Geshe Kelsang himself. Over seven thousand people* gathered from around the world for six days in the Hippodrome in Cascais, all doing their best to refrain from harming others and to help them instead. It was impressive. For me, the Festival in Portugal demonstrated that Geshe Kelsang’s vision for a pure society is not so far-removed from current reality – in fact, people remarked that it was easier to cherish others than not to in that environment.  Peter from Poland, the cousin of a close friend who was on his first trip to any kind of Kadampa gathering, remarked that he had never seen so many peaceful, smiling people, and “They didn’t even mind me going through their bags!” (he was on bag check in case you’re wondering). 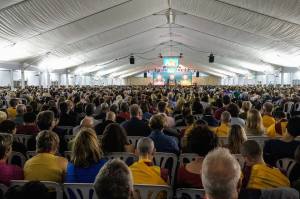 Your turn: do you agree or not that moral discipline can make life less boring and more enjoyable for you and your circle?

While on the subject of 7,200 people practicing moral discipline at the same time, I just wanted to add something … I found it fascinating that far too many causes and conditions to count were involved in the arising of this Festival, a Festival that had been talked about for a very long time and then appeared for six magical, dream-like days. The feat of organization, transforming an empty hippodrome into a Pure Land for 7,200 people, was supplemented by the umpteen intentions, conversations, imputations, and travel plans created over months and years by individuals all around the globe — from Lisbon to Zululand. (And if we take all the karma from past lives into account…) 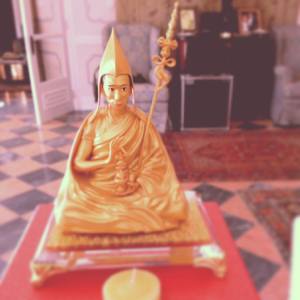 Meanwhile, countless more causes and conditions came together to produce the  queue snaking out of the Festival shop, where people waited just a few more minutes to buy their statue of Geshe Kelsang Gyatso. This statue is exactly the same as the new statue of Geshe Kelsang that arrived in the World Peace Temple in England this summer, except for being only six inches tall. These 2,000 statues too travelled a very long way, in a shiny red box, complete with a throne, hat, and khatanga. Seven weeks previously they were in China, then they travelled the globe via Hong Kong, Malaysia, up the coast of Sri Lanka, up the red sea past Mecca, past the pyramids, into the Mediterranean. Three days holidays in Algiers and a week in Spain, then a whole day waiting in customs less than two miles from the Hippodrome in Cascais. They arrived at the Festival just on the day it started, phew, along with the thousands of travelling Kadampas. They have been privately sponsored and all proceeds go to the International Temples Fund. 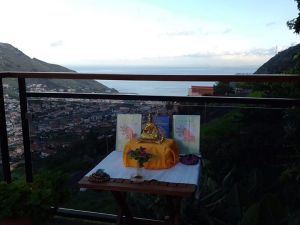 The Festival has now dissolved like a rainbow into the sky because its innumerable causes and conditions have ceased. (Though not inherently–there will be positive effects arising individually and collectively from this Festival for years to come.) Now there are pictures of Geshe-la statues all over the world appearing on Facebook, as he continues to travel far and wide. What do you make of that?!