I watched the movie Chimpanzee last night with my friends Anya and her two great kids, Zia (12) and Tom Tom (10). We wanted to see it before May 3rd as Disneynature are donating some of the profits this week to the Jane Goodall Institute.

(Spoiler alert: I knew the plot before I watched the movie and it made no difference, but you could always go see the movie first and then read this.)

Oscar is Isha’s child, and the early part of the movie shows his first years growing up under her doting care, learning how to smash nuts with the right tools and goofing around with his friends while she tries vainly to sleep. (Anya related to all these early scenes.) He looks so human, they all do. (Or we look like chimps.) His chest and rib cage looks like a little hairy boy’s chest and rib cage. His hands are like our hands. And his face is expressive, by turns curious, amused, playful, soulful.

When the film-makers started the movie, they didn’t know that his mother would be killed. But she is injured by the patriarch Scar and his army of chimpanzee rivals from over the Ridge in the rainforests of the Ivory Coast, in a raid on their nut grove. Isha becomes separated from her family, and is picked off by a leopard (this being Disney, the gruesome scenes are only hinted at.)

Tiny Oscar looks for her everywhere. As the days go by, he becomes thinner and thinner, and covered with ticks because no one is grooming him. He tries to stick his little arm into a bees’ hive, but it isn’t long enough to reach the honey, and he just gets stung. He tugs at all the other mothers, asking for help, but they have infants of their own and growl him away. Even his friends are not playing with him like they used to. Oscar is alone.

At this point, I had read beforehand, the film-makers thought their movie was over. But then something extraordinary happens. The only person Oscar has not approached, and with good reason, is Freddy, the enormous gruff alpha male. When Oscar does finally pluck up the courage to approach, Freddy surprisingly lets him sit near him, and Oscar starts to watch and learn.

Oscar follows Freddy everywhere, and from his side Freddy develops more and more interest in Oscar, until he is giving him the choice portions of the food he finds and prepares. And then one day Freddy lets him ride on his back, something that a male chimp never does, and certainly not the Big Boss who has a reputation to maintain.

The movie shows that over the coming days and weeks Freddy becomes devoted to Oscar. He grooms him, something usually reserved for those higher in the hierarchy, not the weakest member of the group who has nothing to offer in return; and he even lets Oscar sleep in his arms. He adopts Oscar, and Oscar is saved. The movie has a happy ending, thanks to love.

Life in that world is not easy, and there are no final happy endings in samsara. The rival gang of hungry chimps, seen off once thanks to Freddy’s teamwork, will be back. The chimps still have to hunt other monkeys for food — monkeys intelligent enough to realize they’ve been ambushed and that there is no escape from being ripped limb from limb (also hinted at, not shown.) The photography and scenery in the movie is spectacular, including scenes set in slow and fast motion, but beneath that seemingly enchanting cloud-wrapped canopy of trees lies a very traumatic world, none of whose inhabitants ever feels truly safe.

Spending over an hour in the company of chimps in this movie helps us see how similar to us they are in many ways – in terms of their wishes and fears, their maternal love, their cleverness at using tools to prepare food, the importance of teamwork to survival, their cultivated social relationships, their rivalry and violence, and their bodies. And Freddy’s unexpected reaction to Oscar, in particular, shows a remarkable, selfless love. No one could argue that this love is merely instinctive, because it does Freddy’s standing in the group no good when, preoccupied with Oscar, he is unable to cultivate his allies or patrol his borders. It works out okay for him as it happens, but he didn’t know this when he fell for the small bundle of love.

This movie is a good testimony to how animals can share with us the same emotions, feelings, ability to learn, sociability, and even self-awareness. They are in a lower realm, and they don’t have the opportunity to develop spiritually in this lifetime, but they have minds, they think and feel, and their Buddha nature is no different to ours. They are not mere bodies with instincts, devoid of sentience or thought, as many people claim in justification for treating them badly or as less than people.

“There is meaning in those eyes” 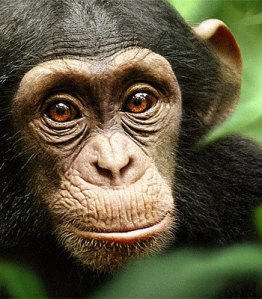 I saw an interview with some of the film-makers, who spent up to three years in the jungle with the chimps, and here are some of their remarks:

People watching this movie “can understand that the chimps’ potential and relationships are as watchable as a human drama.”

“Why did Freddy adopt Oscar? It was pure altruism. It was selfless looking after the young orphan where he hasn’t got an agenda.”

“When those eyes look out at you from a massive screen, there is meaning in those eyes, and we as human beings connect to them.”

“The chimps are very endangered, the rain forest is being cut down, they are part of the bush meat trade, living in fragmented patches of forest, threatened with extinction.”

“[The audience are] going to see that we are not the only beings with personalities and minds capable of thought.” ~ Jane Goodall.

By the way, for the parents amongst you, I can report that Tom Tom turned to us in the middle and whispered loudly, “I LOVE this movie!” Both kids pretended to be chimps after the auditorium emptied, running and jumping through the aisles, and even their own mother said she could not see that much difference between them and Oscar… ; – )

In Buddhism, person, being, self, and I are synonyms. Human beings are just one type of person. That has always made sense to me.

And my question to anyone who watches this and sees Oscar’s eyes is:

Who can believe that he is not a person?

Here are some interesting links to other chimpanzee and primate stories:

If only they could all be freed. Chimpanzees see sunlight for the first time in 30 years.

Are animals smarter than people?