In the last few days I’ve had a few things go wrong with this body – none of them worth writing home about, but, added together, annoying enough. Bad allergies, stomach pains, an infected finger, a fever, and less of my taken-for-granted ability to dive into my heart and stay there.

High time to transform this physical suffering because that is what Kadampa Buddhists do – we love suffering! Don’t we?! Hmmm. Maybe. Or at least we try not to mind it too much, and use it to make spiritual progress. Eventually, yes, we love it, for I have met lots of practitioners who love quite major suffering already. I admire them and aspire to their attainments, for then suffering will hold no fear. The end goal is to put a stop to our own and others’ suffering forever, and we use the appearance of suffering to help us get there. So this is a short tale of what I tried today.

(Look, admittedly, this is not going to be an inspiring account of how I transformed cancer. A few minor ailments are nothing in the grand scheme of things, I know that, in fact it is sort of the point; but you have to start somewhere and the important thing is to deal with whatever is arising for you.)

The tale of a sore finger

So this story starts first thing this morning with my finger, or, more precisely, the top inch of my finger. Who knew that such a small area of the body could throb so much! It makes me realize that there is not an inch of my body that is not ready to hurt me, that inevitably will hurt me if I insist on identifying myself with meat and nerve endings.

I made the mistake of looking up infected fingers on Google, to discover the horrible truth that, left untreated, I was about to lose my whole finger… and that the infection could spread to other fingers and (left unsaid but I could see where this was going) I would soon lose my entire hand!!! Aarggh! My finger is now the most important finger in the whole wide world! It has to be saved! Moral of the tale: stop surfing the internet while under the influence of self-cherishing, it doesn’t help. To be fair, Google was useful on the home remedies front, and I’ve been dutifully dipping said finger into a mixture of warm water and apple cider vinegar for 15 minutes several times a day, during which times it is interesting to see how little else gets done.

Between finger-soaking and nose-blowing and stomach clutching and general woe-is-me’ness, early this morning I decided to be nice and wash some of the soiled litter off the tiny soft paws of this harmless-looking round kitten. But appearances are deceptive, I discovered not for the first time, when he yowled and sunk his nasty scratchy sharp nails right into my poor swollen finger. I allowed myself a little optimism as the blood spurted, “Perhaps he has lanced this wound, saving me a visit to the doctor for surgery and amputation!”, but alternatively, I then thought, he might have added cat scratch fever to my list of ailments. I’m never going to foster horrible little kittens again …

Aarrghh! self-cherishing feeling sorry for itself and blaming others again … Clearly it was time for some contemplation on all of this, or my day was going to get away from me.

Samsara throws up one problem after another, waves on an ocean. No sooner have we dealt with one thing — the thing we thought was all that was standing in the way of us and unbounded happiness – then something else comes up.

“There’s always something”, as my friend M said to me last week, “until there isn’t.”

And that “isn’t” time will only come when we recognize, reduce, and abandon permanently our self-grasping ignorance, destroying the ocean of samsaric suffering once and for all.

If we think about our suffering out of self-grasping and self-cherishing, we suffer. If we think about it to inspire us to overcome true sufferings and true origins, we have the liberating thought of renunciation, not suffering.

This sore finger ain’t no thing — doesn’t matter — as they say, compared with the sufferings of my countless future lives.

We blame others, even kittens, whining away like “childish ones”, as Buddha described us; but all the blame can rightfully be laid on our own self-grasping. Not understanding that the things we normally see do not exist, grasping at a world outside of the mind, we develop self-cherishing, anger, and attachment, which in turn create the contaminated karma that cause our endless problems to appear. Other living beings and situations can only ever be conditions for our own karma to ripen.

To destroy the whole of our samsara with its literally endless problems, we only need to re-think the way we are viewing things. How hard is that, given that we currently have access to all the teachings on how to do it? As the great Yogi Saraha says, in one of my favorite quotes: 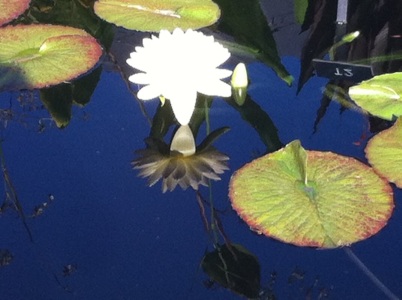 Or, put this way:

No self, no problem.

The things we normally see do not exist, and that includes ourself, sore fingers, and everything else.

I cannot be found anywhere in my body or mind, and nor can I be found anywhere else. I hurt because I mush my sense of I up with my finger, but I am not my finger. You cannot find me in there, even though I say “Ow, I hurt”, or “This is hurting me,” or even “My finger hurts”. Where is the I that owns the finger?

It is true that our body that we normally see does not exist, and there is no body other than this; but we mistakenly believe that our body that we normally see actually exists and, because of this, we experience sufferings of the body such as sickness as a hallucination, as a mistaken appearance, as like a dream. ~ How to Understand the Mind, p. 311

My finger cannot be found in its parts or anywhere else — try pointing to your finger without pointing at its parts.

This sore finger ain’t no thing, for it cannot be found anywhere.

I decided that my finger was like a portal into the lives of others — those, for example, who have lost limbs in fighting, or those not born with any limbs to begin with, or burn victims with large parts of their skin in agony. Let alone all those in the lower realms. I wouldn’t necessarily think about these people if I didn’t have to transform this paltry finger pain, and so my compassion would not develop.

Similar to renunciation, if we think about our own suffering out of self-cherishing we suffer, but if we use it to think about others’ suffering we develop the wish to free them, which is the peaceful mind of compassion, not suffering.

Just as I was thinking this, the kittens climbed up onto my shoulders, where they are now as well, and started snuffling into my ears. (Sometime in their journey to safety from the kill shelter in Pampa, Texas they developed upper respiratory problems). It was not hard to see that my suffering is NOTHING compared with theirs, and all I want is for them to be out of those kitten bodies and into human bodies or better, ASAP. How is that going to happen if I don’t make it happen?

This sore finger ain’t no thing compared with the sufferings of countless other living beings.

There is no suffering in the Pure Land. If out of renunciation and compassion I dissolve everything into bliss and the wisdom realizing that all the things I normally see do not exist — including my entire meaty body, self, mind, and world — I can then appear myself 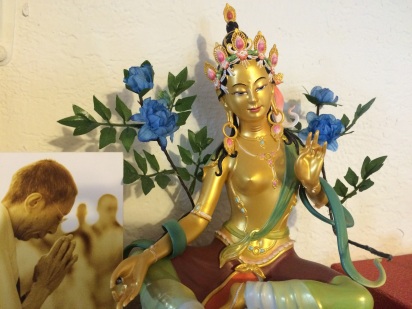 as Buddha Vajrayogini in the Pure Land, and the basis of suffering has gone for ever. Buddhas’ fingers give rise to nothing but endless bliss and benefit.

So my sore finger is reminding me to go straight away, now, to the Pure Land — why hang out any longer in a meaty body that can hurt all over, and sooner or later no doubt will, especially given my increasing age? Let alone all the bodies I’ll have to keep taking in all my future lives. Nasty stuff. It has to stop now, I have to stop ordinary conceptions and appearances.

I am switching to Keajra channel and staying there, resisting any temptation to flick back to samsara channel on the frankly remote chance that something better might be on. That hasn’t happened yet.

This sore finger ain’t no thing in the Pure Land.

Having had quite some success with this contemplation despite my fever, and feeling pretty darned good by now, I then applied these lines of thought to my running nose and my stomach ache, and threw in a few emotional issues too while I was at it. And, just as Buddha promised, I felt better and better the more grist I threw to the mill.

I even came to the conclusion that I’m loving me some suffering! (However, lets not push it … )

The ability to transform our everyday appearances of suffering into something immensely meaningful and joyful is HUGE, and a major hallmark of a genuine Kadampa. So I’d like to open this conversation up to you — inspire us, have you used Buddha’s teachings to transform your suffering?

Ps, My finger miraculously cured itself while I was writing this.

8 thoughts on “Ain’t no thing”